The coronavirus recession is dramatically shrinking the global economy. According to the World Bank, we are currently in the worst recession since World War II. Exactly how this will impact the standing of the largest economies is unknown, but here’s the latest projected top 10 by GDP (PPP). 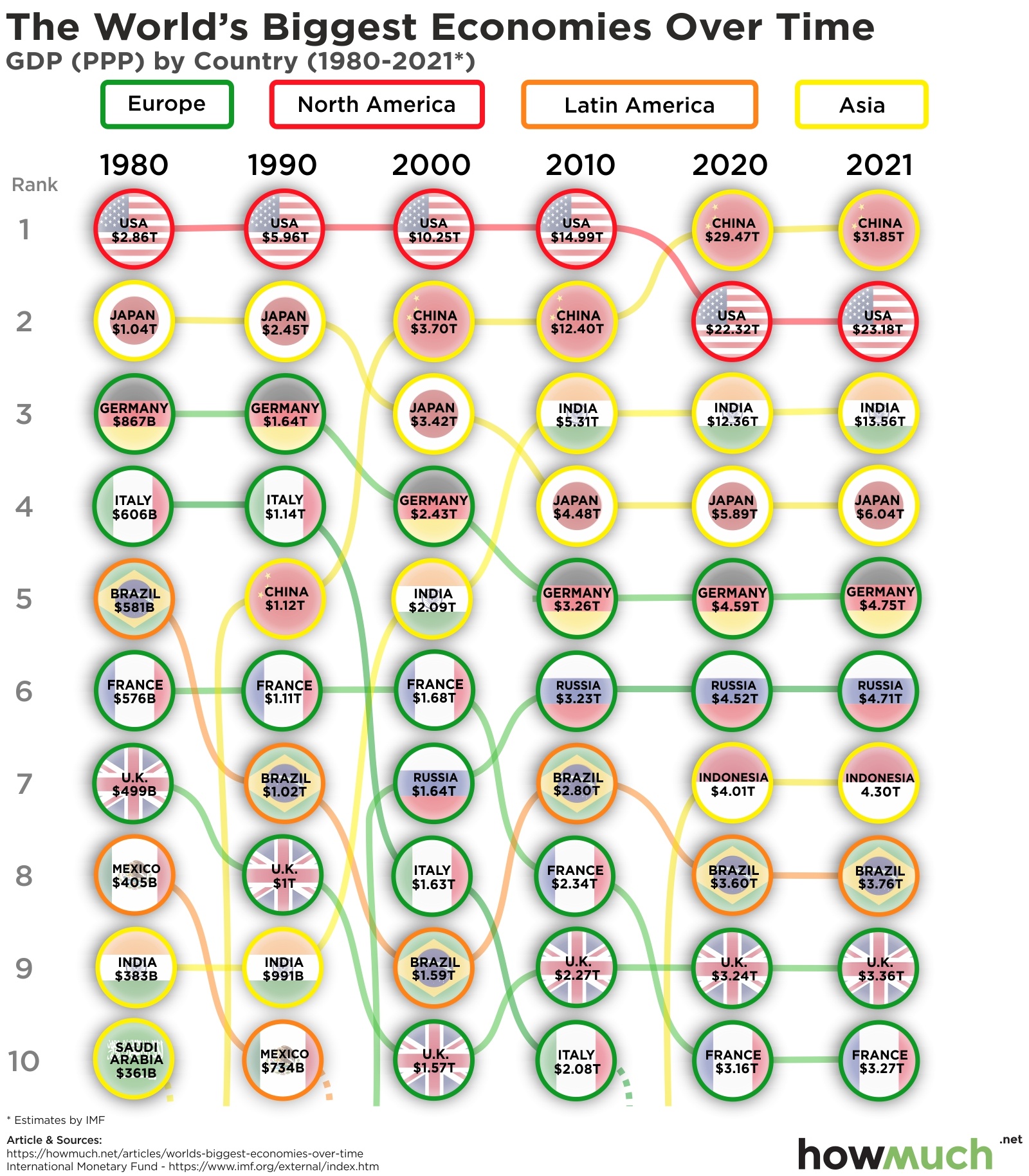 We wanted to understand how the top 10 largest economies in the world measured by GDP have changed over the last few decades. We took historical GDP figures from the International Monetary Fund (IMF) from 1980 to 2020 with a projection for 2021. After color-coding each economy by continent, we traced where it landed in the rankings decade by decade. This snapshot reveals at a high level the grand narrative over the last 40 years, which is the emergence of Asian economic power and the relative decline of the Western industrialized world.

One of the most obvious trends in our visual is how the U.S. previously held the top spot decade after decade. Starting in 1980 with a GDP of $2.86T, the U.S. was always significantly larger than the countries in second place. The Japanese economy took off after 1980 and eventually reached roughly one-third the size of the U.S. around the year 2000 ($10.25T vs. $3.42T). But then Japan plateaued and today only has a GDP of $5.89T compared to $22.32T for the U.S.

At a high level, our visualization reveals the macro trend of global economic growth over the last 40 years. Asian economies thrived through industrialization and urbanization, becoming the factories of the world and lifting billions of people into the middle class. This narrative is most applicable for China, which wasn’t even counted among the top 10 economies before 1990. However, China now has the largest economy in the world at $29.47T today, and is projected to grow to $31.85T next year. The same rapid growth is evident for other Asian countries too, like India ($12.36T), Japan ($5.89T) and Indonesia ($4.01T).

If Asian economies are rising to become the largest in the world, then they are taking the place of industrialized Western countries. In 1980, Germany had the third biggest economy in the world at $867B. It is projected to be in fifth place at $4.75T by 2021. The French economy tells a similar story, starting at $576B in 1980 in sixth place and falling to tenth by 2021 at $3.27T. Italy fell out of the top 10 completely.

The wild card moving forward is how the coronavirus will impact economic growth. The IMF recently found that the cumulative loss of economic output due to the coronavirus will total about $9T through 2021. And although a lot remains unknown about the virus, the largest economies in the world will look very different as a result.

How do you think the coronavirus will affect the economy? Let us know in the comments.

Do you need insurance for your business? Don’t worry, we’ve got you covered.