The coronavirus is upending the global economy in a lot of ways. Many companies are allowing their employees to work remotely forever. Millions of Americans remain unemployed due to shutdowns and cutbacks. And the future is still very cloudy as to what shape a recovery will eventually take. Our latest visualization captures the state of the global economy on the eve of all the coronavirus disruption. 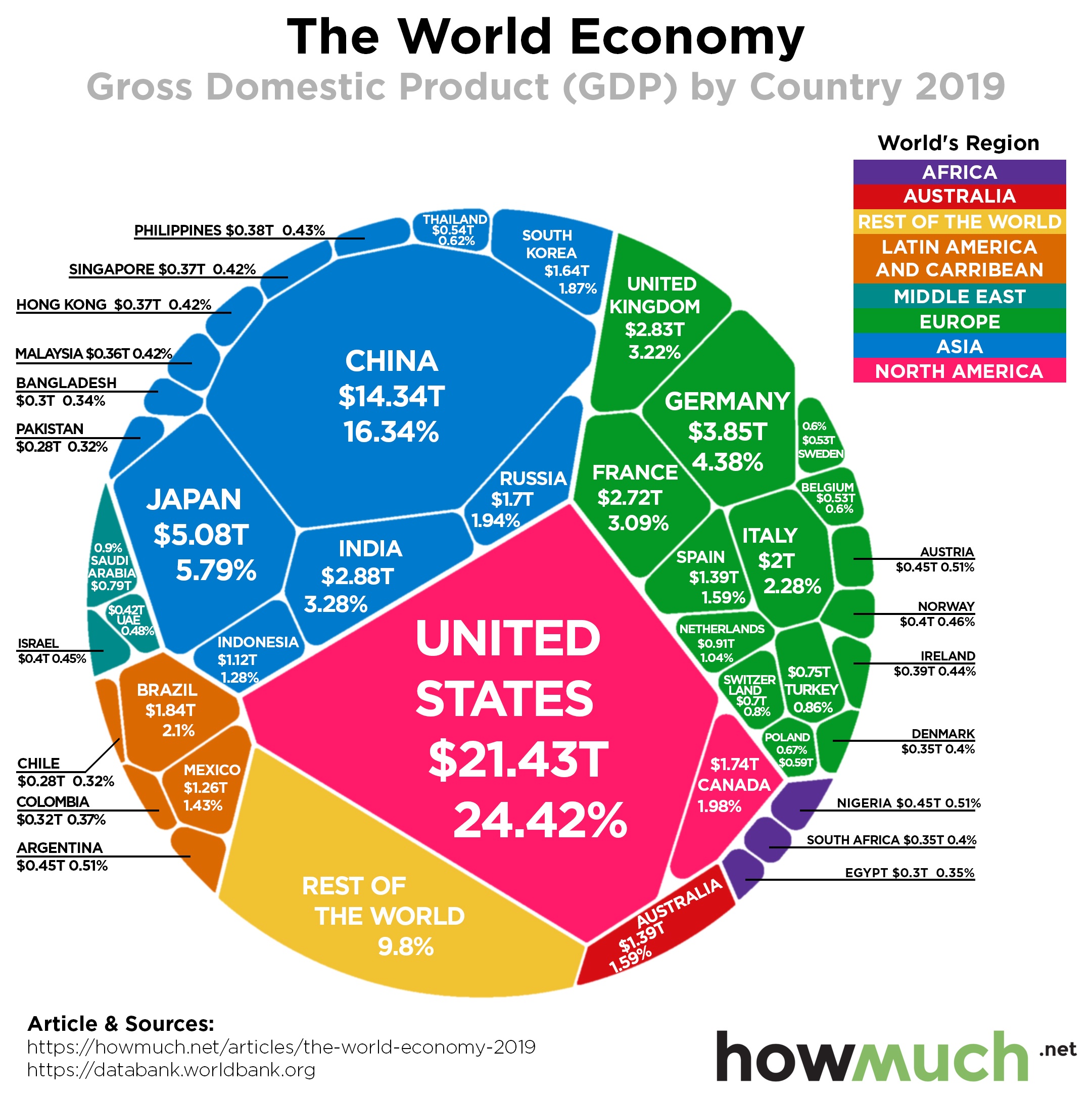 We found the data for 2019 gross domestic product figures over at the World Bank. First we divided the “pie” of the global economy into color-coded continents. Then, we sized each country according to its relative contribution to the world’s GDP, in effect creating a snapshot of the global economy on the eve of the coronavirus depression.

The first and most obvious insight from our visual is just how big the U.S. economy is compared to the rest of the world. At $21.43T, the Americans enjoy an economy that is more than $7T larger than the second biggest, China, at $14.34T. Another insight is how the other economic powers, like Japan ($5.08T), Germany ($3.84T) and India ($2.88T), are actually not very big compared to the U.S. and China. In fact, the rest of the world is made up of relatively small economies. Only 17 countries have a GDP figure of at least $1T.

One of the most interesting things to do with this type of visual is to compare how it changes from year to year. India’s economy continued to grow and surpassed both the United Kingdom and France in 2019 to become the fifth largest in the world at $2.88T. The United States ($21.43T) and China ($14.34) both grew in size overall as well as a relative slice of the global economy, changing from 23.89% to 24.42% for the U.S. and from 15.86% to 16.34% for China. This means there is still a large gap between the American and Chinese economies, and China has a long way to go to overtake the top spot.

A key thing to remember about GDP figures is that they do not take into account population. The U.S. has a significantly bigger economy than countries like China and India, but the U.S. also has significantly fewer people. The average American is therefore a lot wealthier and enjoys a higher standard of living compared to the average person in China or India. Our visualization of GDP per capita supports this conclusion.

Do you think the coronavirus will change the ranking of the largest countries by GDP? Let us know in the comments.

The coronavirus is upending the global economy in a lot of ways. Many companies are allowing their employees to work remotely forever. Millions of Americans…