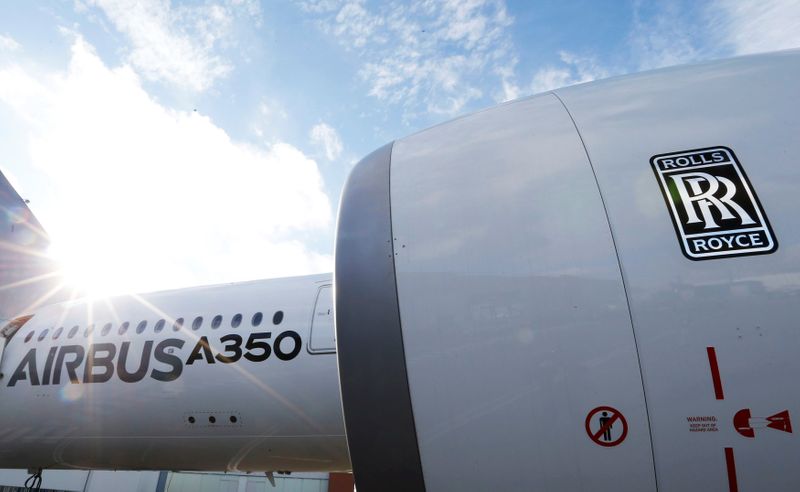 © Reuters. FILE PHOTO: File photo of an Airbus A350 with a Rolls-Royce logo at the Airbus headquarters in Toulouse

(Reuters) – British aero-engine maker Rolls-Royce (OTC:) signalled on Thursday it expects to cut some of its workforce, after reports that it was considering cutting up to 8,000 jobs to weather a global aerospace sector slump.

A source close to Rolls-Royce, one Britain’s best known industrial names and one of the world’s main producers of jet engines for airliners, told Reuters last week that it was looking at cutting up to 15% of its 52,000 strong workforce.

“We have promised to give our people further details of the impact of the current situation on the size of our workforce before the end of this month and will consult with affected employees in due course,” Rolls-Royce (L:) said.

Shares in Rolls-Royce, which said in a statement it had furloughed 4,000 staff in Britain, were down as much as 3.6% at 283 pence in early trading. Shares in the company have lost nearly 60% of their value this year.

Rolls-Royce also said it was cutting its forecast for production of widebody plane engines to around 250 widebody engines in 2020, down from its prior forecast of 450, and taking steps to save 1 billion pounds in costs.

The company said its civil aerospace widebody engine flying hours were 40% lower than expected for the first four months of 2020, reflecting a 90% collapse in April as airlines across the world ground most of their fleet.

“The severity of the disruption caused by COVID-19 is expected to lead to a smaller commercial aerospace market which may take several years to recover,” it said in a trading update.

“We must … take the difficult but necessary decisions to ensure the group emerges from this period with the appropriate cost base,” it said, adding that it would consult with trade unions on any layoffs.

Before the coronavirus crisis all but halted air travel this year, Rolls-Royce was striving to emerge from a multi-year turnaround plan and it said it expects a significant net cash outflow during the second quarter.