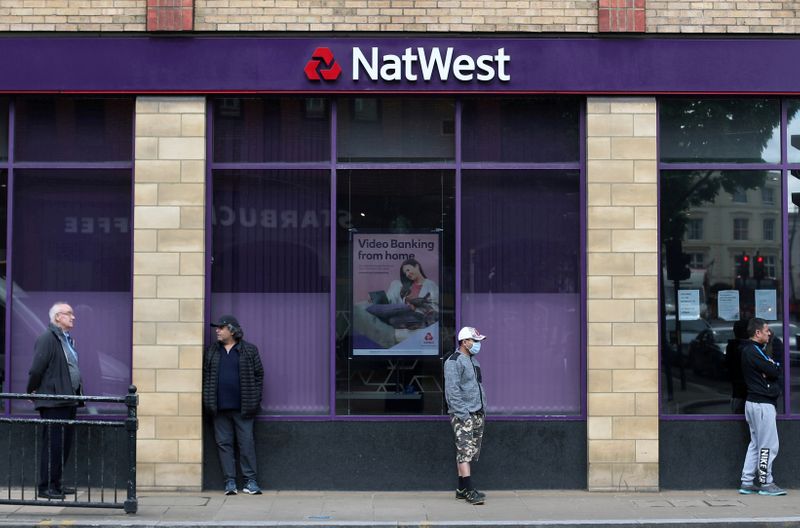 © Reuters. FILE PHOTO: People maintain social distance while they queue outside a Natwest bank in Wimbledon in London, Britain, May 1, 2020. REUTERS/Hannah McKay/File Photo

By Kirstin Ridley and Iain Withers

NatWest pleaded at a hearing at Westminster Magistrates’ Court on Thursday. An FCA lawyer told the court the “likely sentence is a very large fine”.

Prosecutors at the Financial Conduct Authority (FCA) alleged the bank failed to monitor suspect activity by a client that deposited about 365 million pounds in its accounts over five years, of which 264 million was in cash.

The criminal action, first announced by the FCA in March, was the first against a bank under a 2007 money laundering law.

“We deeply regret that NatWest failed to adequately monitor and therefore prevent money laundering by one of our customers between 2012 and 2016,” NatWest CEO Alison Rose said in a statement.

The client at the centre of the case is collapsed Bradford-based gold dealership Fowler Oldfield, Reuters and other media have reported, which was shut down following a police raid in 2016.

The charges are linked to a separate case against 13 individuals based in cities across the country, Reuters has reported.

NatWest remains 55% taxpayer owned after receiving a 45 billion pound-plus ($61 billion-plus) bailout at the height of the 2008 financial crisis.

No results matched your search Stock Markets13 hours ago (Sep 12, 2020 07:24AM ET) © Reuters By Christiana Sciaudone Investing.com — It pays to be…