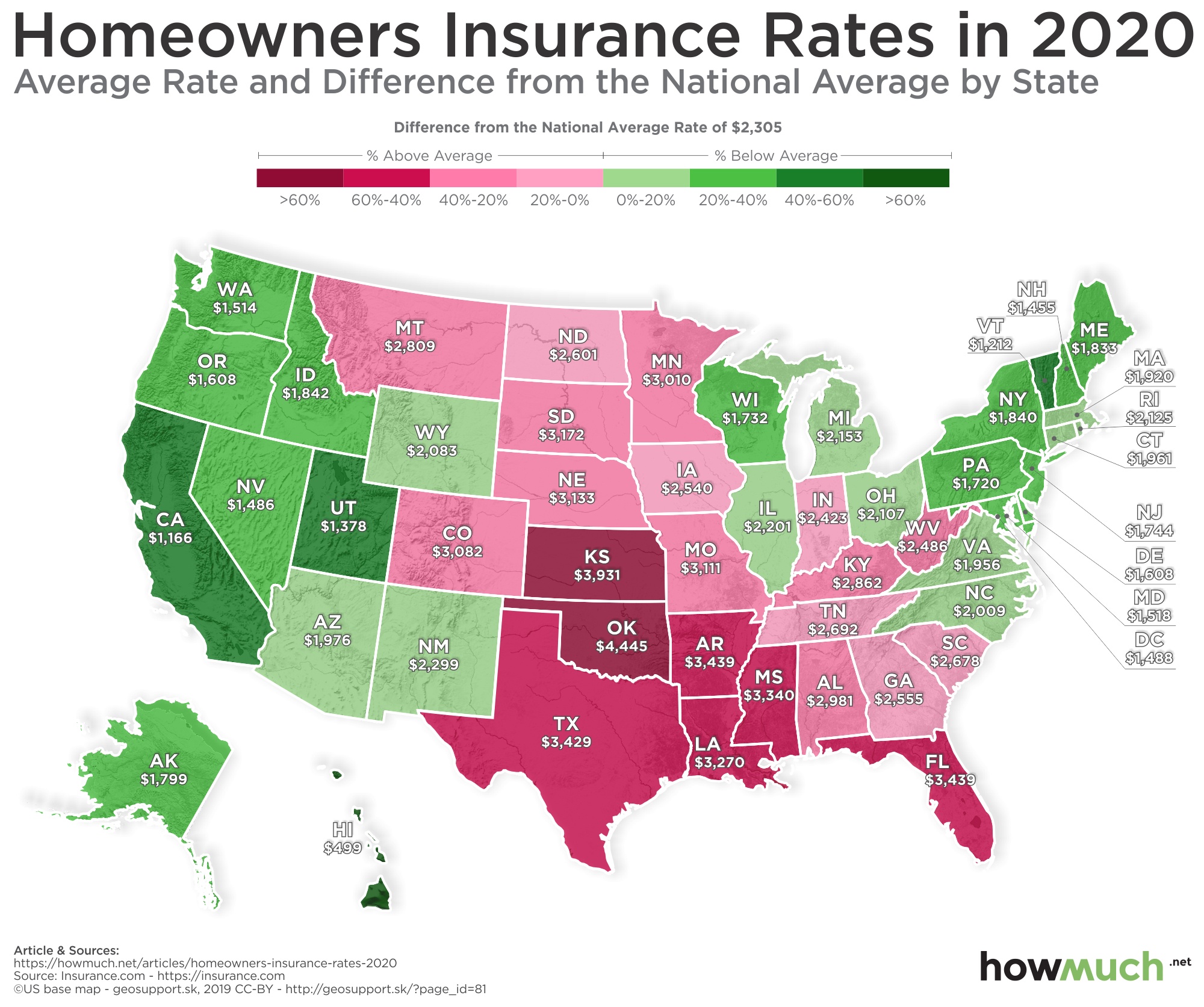 We found the data for our map at Insurance.com, a cost comparison website. There are a few assumptions behind the data in our map. Imagine a married couple with excellent credit wanted to insure a home worth $300,000 with typical policy features, like a $1,000 deductible and guest medical coverage of $5,000 per person. We calculated the average cost of insurance in each state, then plotted a color-coded map based on how much more or less each state’s rates cost than the national average. This lets you easily see both the relative and absolute totals of average homeowners insurance costs around the country.

There are two interesting insights about the homeowners insurance market in our map. First, the most expensive states tend to be located in the South along the Gulf of Mexico and stretching into Tornado Alley. Oklahoma is by far the most expensive state in the country at $4,445 per year, or 92.8% above average. If you drew a straight line from Montana to Florida, every state would have an above average rate. That’s because geography is the single biggest determiner of natural disasters like hurricanes, tornadoes and avalanches, which tend to destroy property and drive up insurance rates.

Another interesting insight is how homeowners insurance is relatively cheap on both coasts. Vermont is the most affordable in the Northeast at just $1,212, or slightly more than $100 per month. And check out California, where it only costs $1,166 on average. Bear in mind we assumed a starting home value of $300,000 to arrive at these numbers, making it an apples-to-apples comparison. We know $300K goes a lot further in some states than others.

But here’s the most important thing to remember about homeowners insurance: it only offers protection against specific things, or perils, like fire and tornadoes. The vast majority of insurance policies on the market today do not offer coverage for earthquakes or floods. These types of natural disasters would completely wipe out the property and casualty insurance industry. That’s why there are other separate insurance policies available in states like California, where the government mandates earthquake coverage for certain residents and requires new buildings to abide by strict earthquake-mitigation codes. Companies simply wouldn’t offer that type of protection if it weren’t required by law.

If you like our visualizations, give us a shout on social media and tell your friends about our site.