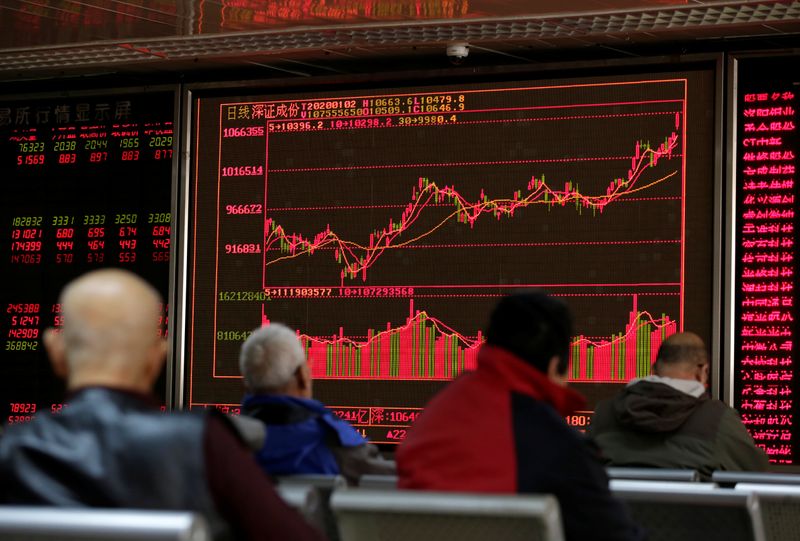 © Reuters. A board shows stock information at a brokerage office in Beijing

By Andrew Galbraith and David Henry

SHANGHAI/NEW YORK (Reuters) – Asian shares rose on Friday as investors focused on talks between U.S. and Chinese trade officials and solid corporate earnings rather than the looming release of data expected to show the worst U.S. unemployment rate in more than 70 years.

Having opened higher following gains on Wall Street overnight, Asian markets had a further boost late in the morning on Chinese state media reports that U.S. and Chinese trade representatives had held a phone call and pledged to cooperate on carrying out the countries’ Phase 1 trade deal.

While rising equity markets on Friday were accompanied by a slight uptick in U.S. Treasury yields, bond markets remained focused on the shaky global economic picture as coronavirus-related lockdowns continue to depress economic activity, despite signs of reopening.

“The equity market is disconnected and optimistic … We’ve got this bizarre scenario at the moment, where the bond market is really looking at the doomsday economic data and also hopes for potentially further support from the U.S. Federal Reserve,” said Ryan Felsman, senior economist at CommSec in Sydney.

Data from Japan on Friday showed the impact of lockdowns, with household spending plunging 6% on year in March, and service-sector activity shrinking at a record pace.

Bond markets were jolted this week, and the U.S. yield curve steepened after the U.S. Treasury Department said it would introduce a long-planned 20-year bond and expected to borrow $2.999 trillion in the second quarter.

But yields fell from three-week highs on Thursday as investors digested the prospect of a surge in debt supply and as some saw a dim outlook for the economy as it emerges from virus lockdowns.

Federal funds futures continued to show expectations of negative U.S. interest rates on Friday, even as Federal Reserve officials have said such a development would be bad for the economy.

Looming on the market horizon is a report on Friday that is expected to show that the U.S. April unemployment rate jumped to 16% as people stayed home to thwart the spread of the novel coronavirus.

Markets had a foretaste with weekly claims for unemployment benefits that added up to some 33.5 million people over the past few weeks, roughly one of every five American workers.

In currency trading, the falling 0.171% to 99.646 after hitting a two-week high on Thursday as some investors took profits ahead of the jobs report.