Congress and President Trump are responding to the coronavirus pandemic by pumping over $2T of stimulus into the economy. The government is sending checks to workers, guaranteeing loans to small businesses and propping up the airlines. And all of this activity is adding to the national debt, which as our latest visual illustrates, has been exploding for years. 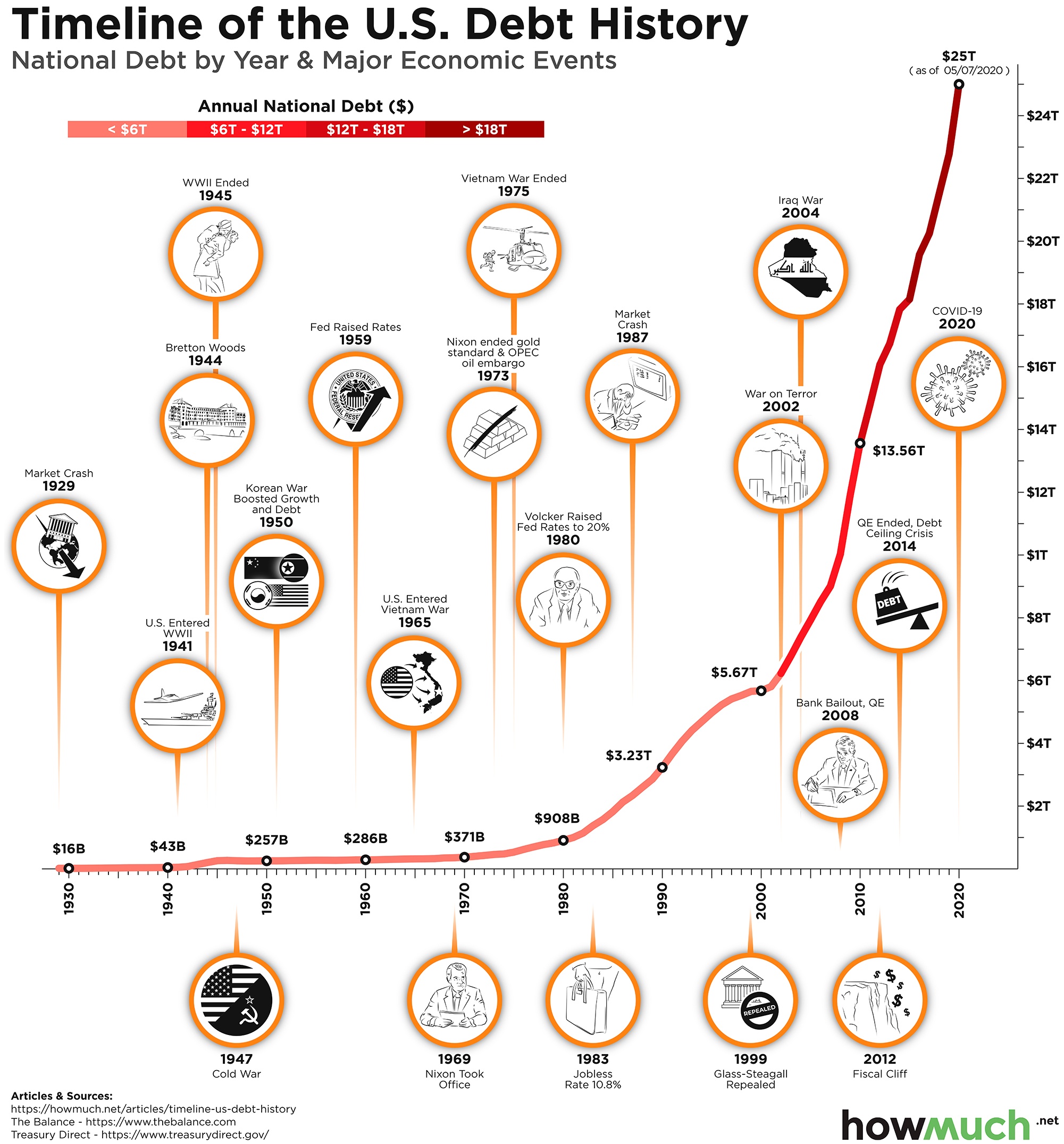 We gathered figures for the national debt and a list of relevant events from The Balance and the U.S. Treasury, which adjusted debt figures for inflation. We added a color-coded schema making it easier to tell every time the country adds another $6T to the debt. Another way to think about national debt is to compare it to the size of the economy. A country with a small economy can’t afford to rack up as much debt as a large one.

Taking the long view of history illustrates how the national debt wasn’t always so enormous. It was less than $40B throughout the entire Great Depression, and it only started to rise when the U.S. entered World War II and ramped up spending to support the military. In fact, the debt topped $269B or 119% of GDP in 1946, the highest ever when measured as a percentage of GDP. As the country recovered from World War II, the debt-to-GDP ratio actually declined even as the overall debt slowly marched upward. Debt-to-GDP was as low as 32% when Nixon ended the gold standard, or $458B.

But then the national debt started to explode in the 1980s, rising in short order from $908B in 1980 to $3.2T by the end of the decade. The inexorable rising national debt didn’t slow until the late 1990s, and the country actually ran a surplus in 2000. Over the next two decades, the country saw one crisis after another. The terror attacks on 9/11, the Iraq War and the global financial crisis all required extensive government spending. And now the government is poised to add another couple trillion to the debt due to the coronavirus crisis. President Trump entered office promising to eliminate the deficit, but he may be overseeing the largest deficit ever at $4T. Of course, the size of the debt depends on the extent the coronavirus damages the economy and whether Congress passes yet another round of stimulus, so the final numbers remain to be seen.

Want to take action while you’re on lockdown at home? Donate to the WHO’s COVID-19 Response Fund now.